Closed for the season
You are here: Home / nature / Do I have a female plant?

A small portion of native trees and shrubs are individually male and female. The species that fall under this classification are know as dioecious.

When a plant has male and female reproductive organs in separate individuals.

When a plant has both male and female reproductive organs on the same individual.

What species are dioecious?

How can I tell if I have a male or female?

This can be difficult depending on the time of year and the age of the plant. Generally, the female plant is the only one which produces fruit. The Winterberry (Ilex verticillata) is a prime example of a species where the female sports red berries and the male only flowers for a short time. The problem is that eventually the berries will fall off making the early spring an extremely hard time to identify the gender. Keep this in mind when looking for clues. 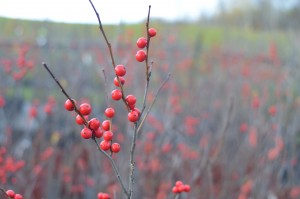 For some species the fruit is not quite as evident to the untrained eye. In spring it may be possible to identify the plant species by its gender specific flowers. The willow family (Salix) can be slightly more difficult to distinguish because the male and females produce a humble catkin. The catkins don’t provide a stark contrast such as the fruit-bearing dioecious counterparts. For willow identification it will require research on the visual differences between the two genders. The male catkin often appears first and can be a quick way to differentiate them.

What male and female ratio will I need?

The ratio is commonsensical but also related to each individual species. The common sense aspect is that pollinators will need to visit both the male and female plants. So, if the male is quite a distance away or there are a hundred females for a one single male plant, pollinators will not be able to complete adequate pollination. To make a pollinator’s life easy aim to establish small groups of intermingled male and female plants. If a pollinator has good access to both gender specific plants, it will ensure that the plants are healthy and create prolific flowers and/or fruit.

As with soil, light and temperature each species requires slightly different cultural conditions. This is also true for the pollination of dioecious species as the preferable ratio may differ slightly. The winterberry (Ilex verticillata) is recommended to have one male plant for every five female plants. Having this ratio for winterberry’s will set the table for them to develop an abundance of deep red, round berries. Be sure to check each individual species before you decide on a healthy gender ratio.

The consequences for a poor ratio or only one gender present is a lackluster fruiting display or none at all. A dioecious plant that has not been pollinated with a member of the opposite sex will not die or fall into poor health. The major drawback is that it cannot procreate, and it will certainly not sport beautiful fruit.

A case for planting two or more monoecious plants

A monoecious plant has no gender difference between two individual plants because the male and female parts of the flower exist on each plant. Although it does not require multiple plants for successful pollination it is of huge benefit to establish more than one plant. This will create an opportunity for cross-pollination which will diversify genetics and encourage greater fruiting yields.

The hazelnut family (Corylus), despite being monoecious, is highly recommended to have multiple shrubs established nearby. The hazelnut shrubs are known for producing valuable, delicious nuts that can be used for cooking and desserts. They are proven to have increased fruiting when cross-pollination occurs. Please consider this when buying monoecious and dioecious shrubs alike.

free goodies straight to your inbox

Catch up on the latest news Monthly Newsletter Sign Up